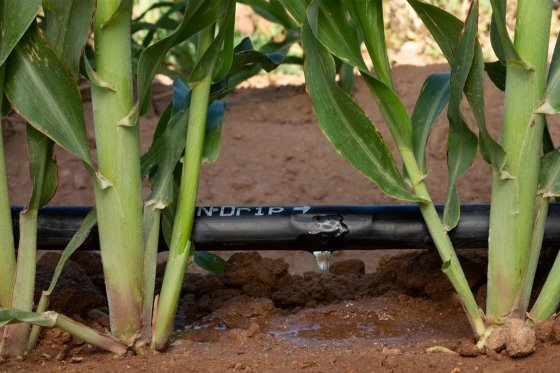 N-Drip, an Israeli company, uses a 22 millimetre diameter irrigation system and also offers a solution for broadacre farmers, with a 44 millimetre diameter system. The technology can reduce water and energy use significantly, by up to 70 percent. The cost of installation can be kept low. “You can use N-drip for 15 years until you get to the price of a standard drip irrigation system”, says Udi David Stern, general manager of N-drip in Australia.

No need for high pressures

Mr David Stern explains that N-drip closes the gap between flood irrigators and drip irrigators by eliminating the need for high pressures. The company uses a drip system that only needs 0.05 bar of pressure.

He emphasises that the system is also suitable for large scale irrigation. “Like cotton farmers, grain farmers, potato farmers or sugar cane farmers here in Australia”, he says. “There you are easily looking at farms of 400 to 500 hectares.”

Mr David Stern points out that with N-Drip and approximately 70% of other drip irrigation systems in use, the tapes or pipes have to be replaced every year or after every harvest. The cost of replacing the N-Drip network after the initial installation is quite low, Mr David Stern says. “At N-Drip we use the existing infrastructure, so the cost will be a lot lower. If I go to a cotton farmer, who uses gravity to flood his fields, we fit in like a glove.”

N-Drip wants to give farmers, that have been using flood irrigation, a new option. “Our prices will vary from one crop to another”, says Mr David Stern. “And it depends on how many rows and metres you will use per hectare, but on average the yearly investment in N-Drip is 600 to 900 Australian dollars per hectare. Plus an investment in the initial set up of a regulating tank, manifolds and connections of 500 dollar per hectare.”

N-Drip has had a lot of appreciation around the world. Last year the company won the Transformational Business Awards, an impact-driven award set up by the International Finance Corporation and The Financial Times . Out of 270 global candidates, N-Drip won the ‘Excellence in Disruptive Technologies’ overall award. The judges said: “The winner has developed a solution that significantly increases the efficient use of water and energy in agriculture.”

Most farmers would say that they are rich in land and poor in water. They do not just look at the money they save

It’s those savings that make N-Drip an interesting investment for farmers, says Mr David Stern. “In all our trials, in Australia, the US, Israel and Africa, we have had water savings that start with a minimum of 20%. We even had a case where we saved 65% of water. Most farmers would say that they are rich in land and poor in water. They do not just look at the money they save.”

Water delivered directly to the roots of the plants

Mr David Stern says that drip irrigation also delivers the water directly to the roots of the plants. “You create an important balance between the water and the oxygen. When you‘re flooding, the first 12 to 24 hours the plant is unable to grow because it’s saturated with water. If you are flood irrigating and a day later there is heavy rain, that rain is gone. You cannot capture that in the soil, because the soil is already saturated. With drip irrigating, the rain can go into the gaps and it will be saved into your soil profile. You can skip irrigation because you have water in your soil.”

N-Drip has had a presence in Australia since last year. “We have been in Australia for two years but the first year we have worked on business development. And we have been getting feedback from organisations and individual farmers”, Mr David Stern says. “The company is doing well. We have grown a lot. I started as a one man show but now here there are eight of us…”