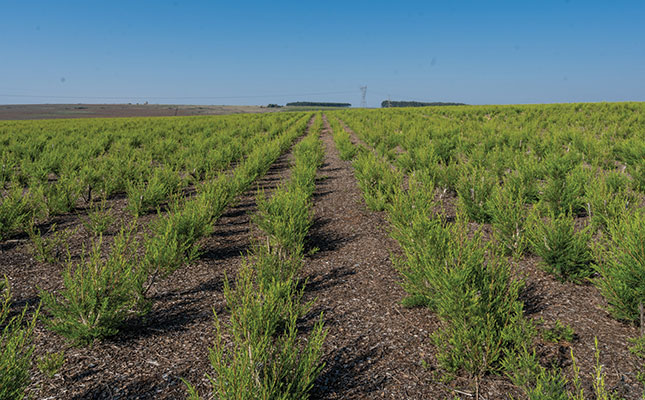 A successful switch from grain to tea tree oil

The stagnating profitability of the forestry and grain divisions of André de Waal’s farming business, Delft Agri, saw him seeking to invest in a high-value crop. Considering the climate of the area (he farms near Mkhondo in Mpumalanga), both macadamias and essential oils were viable options, but after crunching the numbers, the latter came out tops.

“I specifically looked at tea tree, lemon-scented tea tree, Eucalyptus and rosemary. Since they’re in production far more quickly than macadamias, they can generate an income sooner.”

“The first block of tea tree was planted in 2018, and we haven’t looked back,” says De Waal.

The farm currently has 70ha under essential oil crops, and another 60ha is in the process of being planted.

A flourishing market for organic oils
The market for essential oils is growing, especially for those produced organically. De Waal explains that with the global movement towards health and the use of natural products, the future for these oils looks bright.

“Essential oils are widely used in many industries for aromatherapy, medicines, food and beverages, cosmetics, as well as cleaning and scenting the home.”

Production regions differ greatly for each oil and are dependent on climate, soil type and rainfall. When it comes to tea tree specifically, De Waal notes that finding the right planting material for the area that also adheres to the International Organization for Standardization’s quality standards for the oil is crucial. The majority of De Waal’s clients require his oil to meet these standards.

As the Mkhondo area is prone to frost, De Waal selects frost-resistant tea trees. They are also chosen for their ability to handle temperatures that can dip as low as -5°C in winter and reach as high as 35°C in summer.

The right start
Since the oil and vegetative growth potential of different tea trees can vary, De Waal focuses on planting clones rather than seedlings, as he aims for a higher level of terpinen- 4-ol, the main component of tea tree oil.

“There’s a greater level of reliability when planting clones as opposed to seedlings,” he explains. “The latter don’t give you much accuracy, because seeds are collected from an entire block and then grown out.

“They don’t always have uniform characteristics, and you’re never sure how they’ll produce. On the other hand, since a clone is an exact replica of the tree it was taken from, there’s far more accuracy.”

Clones are selected from high-performing trees, including those with a high leaf and oil volume, as well as frost resistance. “Before planting commercially, we trial the trees produced from clones, and if we’re happy with their performance, we produce [more] clones in a nearby nursery and plant them on the farm.”

To further improve the precision of selecting the right trees to clone, Delft Agri has one of only four gas chromatography (GC) laboratories in the country. GC is an analytical technique in which the chemical components of a sample mixture are separated and then analysed to determine their presence (if at all) and concentration.

This not only provides the technicians with more accurate data for use when selecting trees to clone, but is a crucial element in obtaining the sought-after British Pharmaceutical grade certification.

Once the ideal clones have been selected and grown out in the nursery, they are planted at a density of between 20 000 and 25 000 trees per hectare. After 18 months, the first harvest can take place, and thereafter every 12 months, yielding around 200kg of oil/ha/year.

De Waal cautions that the start-up costs for farming essential oils are prohibitive. Distilling and marketing aside, the cost of establishment is around R80 000/ha. The cost of maintaining the plantation thereafter is R30 000/ha for the first two years, but decreases thereafter.

Weed control
To produce organic essential oils, De Waal cannot use herbicides or chemical fertilisers in his plantation. Whatever is required to cultivate a good crop therefore needs to be natural.
Weed management is one of the biggest and costliest challenges on the farm, as it has to be done manually.

“Weeds can rapidly grow out of control, and any competition can set tea trees back. It takes about three years for the trees to become established to the point where vigorous control of weeds is unnecessary. Until such time, keeping the lands clear is a labour-intensive process, as the weeds need to be either slashed or pulled out.”

To aid weed suppression, mulch, which includes spent biomass from the oil distillation process, is spread between the trees.

“Over time, the weeds are suppressed to a level where manual weeding can be reduced. The mulch also aids in pest control, keeping soil temperatures even, retaining soil moisture and reducing soil erosion.”

De Waal also has a compost heap, fed with material waste from the distillery, which is worked into the soil to aid soil health and build up populations of beneficial microbes. In this way, production can continue without the need for additional fertilisers.

“Ours is a much longer process to get the soil health to the stage where it produces to its full potential. If we were to use chemical fertilisers, it would take a year, as opposed to three years. However, because the demand for organic oil is high, and the certification bodies are very strict about what can and can’t be used, we stick to a completely natural programme.”

Tea tree is naturally pest-resistant, so no pesticides are required. De Waal says that even wildlife steer clear of the trees due to their bitter taste.

Harvesting
Rainfall plays a major role in the profitability of tea tree farming, and its suitability to a specific area. Since Mkhondo averages between 700mm and 900mm per year, production there can take place without the need for irrigation.

“While irrigation does have a big impact on yield, ensuring 100kg of oil/ha more, our rainfall is sufficient to achieve a viable yield.

“We used to grow grain under pivot irrigation, so we’ll start cultivating tea tree on those fields. I’m also looking at other essential oil crops with a higher water requirement, which we can utilise our pivots for.”

Harvesting is done once a year by hand, adding to labour costs. Within 18 months, the trees reach a height of 2m and develop a good canopy, and are then harvested in their entirety, bringing the trees back down to just above soil level.

After this, the trees are coppiced, as this stimulates the production of multiple, thinner stems. Since thinner branches, rather than thick, woody branches, are used for the oil, it makes sense to use the coppice method.

De Waal says the decision to harvest manually was a conscious one, as it provides job opportunities.

“In rural South Africa, jobs are vital to the sustainability of communities. So we chose not to mechanise certain aspects of our essential oil production to ensure we fulfilled our social responsibilities. With our current plantations in production, we employ 40 staff for the harvesting and distillation processes. When we establish new plantations, we employ seasonal staff for the planting period, which adds another 20 to 40 workers, depending on the tree species and landscape. We have key employees with certain skill sets to ensure that all the divisions within the essential oils [department] operate at full capacity.”

One of the benefits of planting tea trees is their longevity; the oldest tea tree in the world is currently 60 years old, so De Waal doesn’t anticipate having to replace his trees any time soon.

Distillation of world-class oils
Investing in the next step in the value chain was necessary for De Waal to extract maximum benefit from the oils. Initially, he bought a second-hand mobile distillation unit consisting of two 250kg pots.

However, this was only sufficient for 20ha of crop, and before long it was running 24 hours a day to handle the entire crop. This necessitated further expansion, and today he has double his original capacity.

Once the tree branches have been cut, they are loaded onto a tipper trailer and taken to the distillation facility on the farm. The branches are then fed manually into a chipper to ensure an even spread of material in the distillation vessels.

Each vessel is weighed to calculate the oil yield and extraction rate per plantation so that accurate records can be kept. On average, 100kg of leaves produce 1ℓ of oil.

A steam kettle generates steam, which is introduced at the bottom of the filled distillation vessel. The steam then works its way through the plant material, bursting the oil cells in the leaves and causing the oil to rise up with the steam through the vessel. The oil-saturated steam continues its way into a heat exchanger, where the steam and oil are recondensed into liquids.

Afterwards, the oil and water move into a separator, where the oil floats on top and is then transferred into a fluorinated high-density polyethylene container. The tea tree oil is finally filtered and blended into 1t batches.

Marketing
Part of De Waal’s strategy to market his oils is his shareholding in Ayanda African Oils (Ayanda), a company that sources and markets essential oils from 32 shareholders across South Africa. According to De Waal, Ayanda plays a critical role in his essential oils division, as it helps to guarantee constant export of, and a local market for, his product.

“Having a consistent market for the oils is an important consideration before entering this field. Through Ayanda, we have a collective marketing strategy for all participating growers, which ensures that we get the best prices for our product. We also have better insight into what’s happening on the market and have more control over the entire value chain.”

Ayanda sells essential oils to markets across the globe, including the US, Asia and Europe. De Waal adds that the market is stable, providing constant demand, which is set to grow.

“At this stage, because the demand is so good, we are forward-selling. And with next year’s crop already sold, it bodes well for continued production and expansion.”