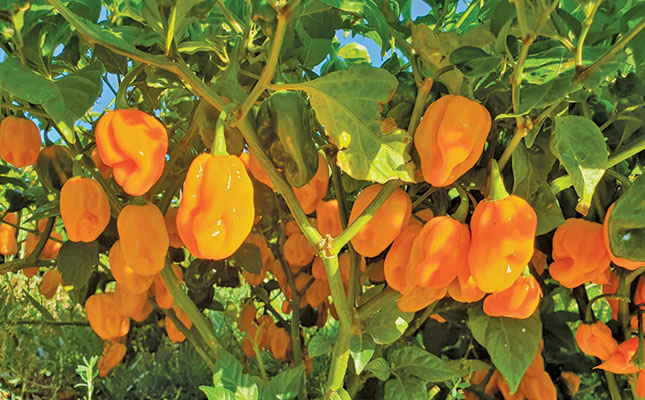 Chillies: a hot crop if you know what you’re doing

To boost his cash flow, JD van Deventer, who farms nursery trees and stone fruit at Vredehoek near Montagu in the Western Cape, used to plant aubergines or peppers at the start of the three-year fallow period between tree plantings.

Prices for these cash crops fluctuated greatly, however, leaving him with good returns one day and substantial losses the next. Tiring of this financial roller coaster, he began looking for a more stable alternative, and ended up, quite by chance, with chillies.

The opportunity came when a neighbour told him of a Cape Town-based processor who wanted a farmer to take over a chilli production contract, primarily for jalapeños.

“The fixed price contract promised to curb the impact of price fluctuations on farm margins,” recalls Van Deventer. “It also didn’t require a whole new skill set, as chillies, aubergines and peppers are produced in much the same way.”

During their first trial 11 years ago, Van Deventer and his father Gideon, better known as Kierie, planted 18 000 plants. But at harvest time, Kierie was disillusioned with the light weight of the chillies.

“He said there was no way I was going to generate enough volume to justify the production costs, but we produced significantly more chillies than we expected, and the processor was more than happy to take everything we could supply,” says Van Deventer.

Since then, chillies have become as important as the farm’s other income streams, with the operation now supplying chillies to four processors.

The products are sold at various farm stalls and in a number of Spar branches, including one in Pretoria and another in Despatch.

The brand was started by a neighbour, who made a red chilli sauce. Van Deventer was thinking of adding value to his chillies at the time and liked the brand name and the story behind it.

“Jumping Jackal refers to a jackal that got stuck in a fence. My neighbour untangled the animal, nursed it back to health, then set it free,” he says.

The diversification made business sense on various levels: it added value to the produce and enabled Van Deventer to make better use of the on-farm 300m2 packhouse.

“We also produce export plums and apricots on 18ha of land. So when space became available to pack our fruit in a large packhouse in town, I grabbed the opportunity, as it allowed me to reduce labour costs and use my packhouse more optimally throughout the year instead of only during the fruit season,” he explains.

Varieties and seedlings
Van Deventer usually plants an average of 120 000 jalapeño seedlings a year on about 3ha, which are rotated over the 30ha on which he produces stone fruit, fig, pear and almond nursery trees for the farm market. He also plants an additional 20 000 seedlings of chilli varieties such as habanero, Thai and cajun.

Due to the recent extended drought, however, he downscaled production to about 80 000 jalapeño seedlings a year over the past three years. Last year’s harvest was a mere 50% of his usual harvest.

Ironically, he feared having a production surplus because of poor sales during Level 5 of the COVID-19 lockdown, but recent sales have picked up once more, and it now appears that he might run out of product before the next harvest.

A number of jalapeño cultivars are available, but Van Deventer prefers Magno, Bravo and Monaco due to the size and quality of the fruit.

“I had to evaluate the cultivars to see which worked best for my production conditions, but also consider whether they were in demand. Monaco, for instance, proved too hot for my market,” he says.

He contracts a nursery in Robertson to grow the seedlings.

“I can’t produce my own seedlings; it’s too technical and labour-intensive, and I’d need expensive infrastructure, such as nets, to do it properly.”

Production takes place on open land after the nursery trees are removed. “The warm climate of the Klein Karoo is ideal for chilli production, and helps to make the chillies hotter,” says Van Deventer.

He adds that open-field production is far cheaper than using shade netting or tunnels, but farmers who produce chillies under protection can extend their market window, enabling them to cash in when there are shortages.

Planting
The seedlings are usually planted from mid-September, but cold weather this year meant that they were planted only towards the end of September. There was also a countrywide shortage of habanero seed, ascribed to the COVID-19 lockdown.

“Planting later interferes with the harvest window. It usually takes 80 days for jalapeño to go into production, whereas it takes 120 days for habanero,” says Van Deventer.

The seedlings are then planted by hand, a job that takes just two days.

Approximately 40 000 seedlings are planted per hectare, with dripper lines being shared between two rows, except for the habanero, where each row has its own dripper line due to the larger size of these plants. Planting in double rows also means the plants shade each other from sunburn.

The drippers are spaced 200mm apart and have a delivery rate of 1,1ℓ/h. In peak summer, the plants are irrigated for two hours each day.

The dripper lines and plastic sheeting are disposed of once the production season is over.

The sheeting is used primarily to suppress weed growth in the planting rows, but also helps reduce evaporation and keep the soil cool.

Van Deventer used the services of a production consultant to help him develop a fertigation programme to meet the nutritional needs of the chillies at different plant development stages. The programme takes into account the available nutrients left in the soil after the nursery trees are removed. Cattle manure, bought in from the Overberg, is applied before planting to improve soil health.

Van Deventer explains that chillies are sensitive to calcium deficiency, which results in black spots developing on the blossom end of the fruit. To prevent the problem, he and his team usually apply gypsum before planting or calcium nitrate as fertigation during production.

“Our borehole water is brackish, so we try not to use it unless it’s really dry and we have no other option. We then mix the water with water from the canal, which is of good quality. Gypsum helps break down salt, while adding calcium to the soil.”

If he notices any other nutritional shortages, he applies foliar feeds as required.

A challenge with chilli production is that only a few products are registered for chemical control of pests and diseases, and these are extremely expensive.

“One might think that chillies are not susceptible to pests because they’re often used as deterrents in organic production systems. But they’re targeted by quite a few, including bollworm, fruit fly, aphids and even false codling moth. Problems with white rust also sometimes pop up in January and February,” says Van Deventer.

The chillies are picked by hand, preferably daily, from December to February, based on market demand. Jalapeño, for instance, is supplied primarily to the pickle market, and is harvested when the fruit is still green.

“They should be at least 7cm long, but they also need to be nicely filled and have a strong rind. If a heatwave hits us and the jalapeño fruit ripens before it can be picked, it’s diverted to the processing market.”

The plants are worked into the soil once the season is over, which helps improve the soil’s organic content. Oats is also planted and worked back into the soil before nursery trees are established again.

“Changing climatic conditions are making it more and more difficult to produce plums and apricots in this area, not only because of the drought but also because of the impact of cold and warm spells that are occurring much more often now than in the past,” he says.

Advice
The chilli market has become far more competitive since Van Deventer started out, with many fly-by-night operators seeing it as an opportunity to make quick money. When these farmers struggle to sell their product, they usually flood the market, which has a negative impact on prices.

In addition, farmers have to compete with large multinationals that can supply the market with masses of cheap product. Van Deventer says he is fortunately buffered from these threats as he has a well-established market that appreciates quality.

“We’ve supplied the fresh market with produce a few times, but the prices were never good enough. The best thing to do if you want to farm chillies, as with most commodities, is to first ensure you have a market for your produce,” he advises.

He adds that farmers should also consider the cost before venturing into production.

A few years ago, for example, a German company offered him a contract to produce peppadews. He then discovered that peppadew production is highly labour-intensive as the pips have to be removed.

To produce the quantity requested by the company would have required up to 300 workers. Machines for pip removal are available, but they cost over R2 million each and a large number of workers are still required to feed the machines.