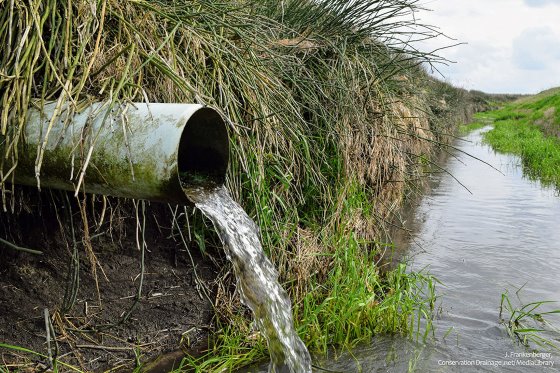 How to balance draining fields with holding onto nitrogen

Underground drains – or tile drains – are often installed by farmers in waterlogged soils in order to get rid of excess water. While drier soil is beneficial to crops, by draining nitrogen can leach into waterways. That leads to contamination, and losing nitrogen means losing money.

So, how can farmers balance draining their fields with holding onto nitrogen? According the American Society of Agronomy, farmers can turn to a decades-long experiment out of Purdue University. The results were published in the Journal of Environmental Quality.

Tile drains can be placed at different distances across a field. The closer they are, the faster they can drain water away from fields. At the study fields in Indiana, drains were spaced either 5, 10 or 20 meters apart.

The concentration of nitrate in the water was the same regardless of drain spacing. But because closer drains led to more water flow, the total amount of nitrogen that left fields was higher when drains were closer together, the researchers found.

The researchers also saw that most of the nitrate that left farm fields did so during the off season, when no big crops were around to use the nutrients.

Crop rotations and cover crops
Over 31 years, the researchers changed how they managed the fields. For example, they switched from growing only corn to crop rotations between corn and soybeans. They also reduced the amount of fertiliser they applied. And they started to plant cover crops. These changes followed the latest research and mirrored current practices farmers are using.

Because of these changes, the concentration of nitrate in the leaching water today is only a quarter of what it was three decades ago, according to the researchers. This lower concentration means that less total nitrate leaches out than in the past.

The researchers noticed another trend. In wet years, more nitrate left farm fields because more water was there to carry it away. Recent years have been wetter, likely due to the changing climate. “The takeaway is that as hard as we try, we cannot control every aspect of our farm fields,” says Kladivko.

My message to farmers is don’t over drain

And, because the fastest drainage doesn’t help crops grow that much better, farmers can choose wider drain spacing, which also saves money on installation.

“My message to farmers is don’t over drain,” says Kladivko. “Try to determine the widest possible spacing that allows for close to optimum yield.”