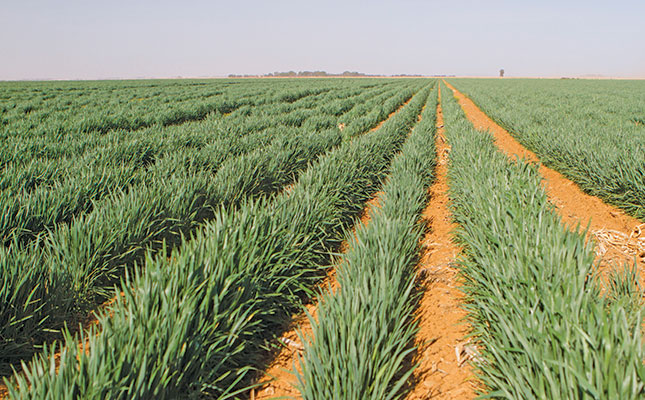 Ask any farmer about planting wheat in the western Free State and you’ll be told that it was an important crop there in the past, but has virtually disappeared from the area in more recent years.

This, it seems, is changing.

Heinrich Botha joined his father, Anton, on the family farm in Bultfontein nearly a decade ago. He says that although they have planted some wheat under irrigation every year, they have not planted dryland wheat since he started farming full-time.

Due to the late rainfall during the 2018/2019 summer, the Bothas have joined a growing number of farmers in their district who are planting dryland wheat.

According to Johan Viljoen of JHV Algehele Boeredienste, a consultant to the Bothas and also the regional agent for Sensako wheat, farmers in the Bultfontein area are estimated to have planted approximately 25 000ha to wheat last year.

“The farmers weren’t prepared to take the risk with late maize plantings [at the end of 2018], and then we received a huge amount of rain in late summer (April 2019) that gave soil moisture levels a massive boost,” says Viljoen.

The time left before the new maize planting season at the end of 2019 would have been too long a stretch for the cash-strapped farmers. So they decided to plant wheat for harvest in November to generate cash flow for this December.

For the Bothas, whose farming operation comprises an 80% cropping component, a dryland wheat crop this year was also an opportunity to use inputs that would otherwise have gone to waste. They had, for example, already applied fertiliser to the soil.

Cheaper inputs
One of the main attractions of dryland wheat is that it is considerably cheaper to plant than maize. Not only is less fertiliser required, but seed and chemical costs are lower.

Wheat, he adds, has a lower fertiliser requirement as it produces much less grain than maize.

Another factor that has made wheat production more appealing is the fact that farmers can now earn a premium for better quality wheat.

Heinrich and Anton explain that many of the cultivars suited to their hotter, drier region are known to produce a premium grade kernel with a high protein content. However, higher quality is linked to lower yield, which affects profit margins.

In the past, farmers received no benefit for producing higher- quality wheat, as they would receive the same payment as for the lower quality type.

This changed last year with the introduction of new grading criteria. Anton, who once served as a regional representative for Grain SA, says that the commodity organisation put in much work to get the price premium in place.

“Grain SA did a brilliant job, which has enabled us to take a chance on wheat again in future,” he says.

Heinrich thinks that the premium will be about R200/t for super grade and B1-grade wheat, while Viljoen estimates that this can translate into a premium of between R300/ha and R400/ha.

For the Bothas, the risk lies less in being able to produce a wheat harvest and more in being able to make a living from the price they get for it. This is the main reason they are excited about dryland wheat production.

“The big thing that makes wheat attractive to us is that the risk in absolute price differences in wheat is smaller than in other field crops,” says Anton.

A key determinant in the price of wheat, the exchange rate, is presently in favour of the wheat producer, making wheat a far better prospect than maize.

Other disadvantages of maize
Climate and market forces have placed farmers in the district under severe pressure during the past five years.

“Looking at maize, you need to harvest at least 3,5t/ha to 4t/ ha just to break even. At 4t of grain multiplied by 80mm of water per ton, you need 320mm of rain in a season to break even,” explains Viljoen, citing research conducted by JHV Algehele Boeredienste.

In contrast, the break-even point (to cover direct and overhead costs) of a dryland wheat harvest in the district is about 1t/ha. Thus, the break-even water requirement for wheat would be 120mm to 150mm for the season, according to Viljoen.

Cultivar research
Regrettably, wheat cultivar development has fallen far behind that of maize. While there has been some improvement in resistance to pests such as the Russian wheat aphid and
diseases such as root rot or rust, this is less significant in the hotter, drier production conditions where the Bothas farm.

“I would much prefer to harvest a B2- or B3-grade wheat, but have double the yield,” says Heinrich.

The Bothas would also like to see more research into cultivars that could provide better drought resistance. Unfortunately, as Heinrich explains, only limited funding is made available to the Agricultural Research Council to develop new wheat cultivars.

“I think a lot more can be done on cultivar development but we would need more funds,” he notes.

Rain at the right time
Viljoen explains that farmers in the district resorted to planting wheat out of desperation, and everybody is waiting to see what will happen with the crop.

Although high soil moisture levels have alleviated some of the risk, a number of farmers will still face disaster if they do not receive rain during spring.

Indeed, says Viljoen, rainfall timing has been another contributor to the decline in wheat hectares in the region over the past decade, with the perception being that the seasons have shifted.

He emphasises, however, that it is not so much the amount of rain as the timing that is crucial, and this applies to both wheat and maize.

Heinrich adds that another concern is unseasonally warm weather.

“We didn’t have a traditional winter with very cold temperatures. Although the nights were cool, the days were warm, which makes wheat grow too vigorously too quickly. This also means we need to get rain as soon as possible.”

The Bothas, nonetheless, remain optimistic about the opportunities that wheat holds for their district, and say that farmers there could start incorporating more of the crop into their planning in future.

“Wheat could be a good lifeline for farmers here this year. If we can manage an average or above-average harvest, it’ll have a very positive effect on the financial position of farmers,” says Anton.