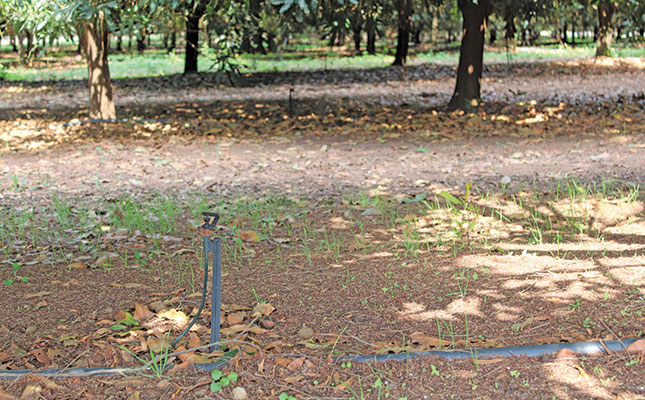 The ongoing prosperity of the macadamia industry has led to a rapid increase in orchards, with the industry adding about 2 000ha each year.

With water shortages increasingly becoming the norm, however, concern has been expressed about the availability of irrigated water for these new orchards.

Lack of research
As the industry is still relatively new in South Africa, little research has been conducted here on the many factors that ensure a macadamia farm’s sustainability and profitability.

In particular, relatively little is known about the crop’s water-use efficiency and maximum irrigation requirements. Theunis Smit, owner of Darwin Consulting, puts it more bluntly, saying that no research has been done in South Africa on how much water a macadamia tree really needs.

“Much of the existing research originates in Australia and the majority of orchards there are dryland, as studies show there’s little benefit to irrigating in high-rainfall areas. We know how much water the trees can use; the biggest challenge is to determine the minimum amount we can get away with. Because the profitability of macadamias is high, farmers are not pressed to adopt new technologies to increase efficiencies.”

One obstacle in determining optimal water use is that there is no one-size-fits-all approach.

“You can have one tree drowning and another drought-stressed in the same orchard! What’s more, most farmers don’t know how much water they’re giving their trees. They can tell you how long they irrigate, but not how much, and a lot of the water is flushed away, taking all the nutrients with it.

“If trees are over-irrigated, they’re placed under enormous stress because much of the oxygen in the soil is removed. The lack of oxygen results in a shortage of microelements, especially iron.”

Overwatering also leads to more leaching of macronutrients, of which nitrogen is a key element for growth and sustainable production.

On the other hand, trees that receive too little water could see a reduction in yield and quality of nuts.

“There could also be a decrease in nutrient uptake,” Theunis adds.

Regarding the issue of ongoing water availability for the exponential growth in macadamias, he says that macadamias use less water than sugar cane.

“Because sugar cane is being replaced by macadamias in many areas, there’ll be more water available, provided macadamia farmers irrigate responsibly,” he notes. This water should be sufficient for all the trees.

“I believe that, with new technology and advancements in research, we can reduce water-use further, giving us more available water for new orchards.

“The world is watching what we do with our water. We need to be able to determine the water-use efficiency of a crop; in other words, how many litres it takes to produce a kilogram of nuts to determine the crop’s feasibility in a water-stressed world.

“While macadamias might use more water than citrus or avocados, the income from the nuts far exceeds that of the fruit, which is also something that needs to be taken into account.

“At the same time, though, you need to take into account the cost of water, electricity, and tree and soil health. When you take a holistic approach to the real cost of over-irrigating, the quest for the perfect balance becomes all the more important.”

Less is more
While it is difficult to pinpoint the exact water requirement, research conducted by Theunis and his brother, Armand Smit, who is technical adviser at Mayo Macadamias, the University of Pretoria, and the Water Research Commission (Project K5/2552//4), has shown that mature orchards require substantially less water than previously believed.

The study is part of a long-term, three-year trial to determine the impact of water stress on the quality and yield of macadamia nuts.

The two-year findings have now been released, and show that dryland macadamias outperform their fully irrigated counterparts. In addition, all trees receiving less than the previously recommended rate outperformed the fully irrigated trees.

The trial was carried out on a mature, 3ha Beaumont block in the Mbombela area of Mpumalanga. Control trees received normal irrigation according to DFM capacitance probes at a rate of around six hours per week, using 50ℓ micro-sprinklers.

The second block was half-irrigated using 25ℓ micro- sprinklers, while another block received no irrigation. On four other blocks, a light water stress was induced at different times during the season.

The non-irrigated trees relied solely on the 760mm of rain the area received for the season. While the rain was often untimely and not evenly distributed, it was still sufficient.

According to Armand, no significant differences in quality were found between the total kernel recovery (TKR) of half-irrigated (35%), non-irrigated (34,8%) and fully irrigated trees’ (35%).

Moreover, no significant differences in TKR were noted between trees stressed during different times of the season and control treatments.

“Interestingly, all treatment trees showed an improvement in TKR and yield from the previous season, suggesting a light water stress will have no knock-on effect on the following season’s yield and quality,” he says.

He nonetheless counsels caution at this stage.

“While these findings are exciting when it comes to the future use of deficit irrigation in macadamia nut orchards, we should realise it’s only preliminary data. The trial must be continued for at least another season in order to be conclusive about the impact of water stress.”

Higher humidity
Macadamias have always been grown in areas such as Levubu in Limpopo, coastal KwaZulu-Natal and the Mpumalanga Lowveld, which are known to be best suited in terms of daytime temperatures.

“But recent research shows that macadamias are less sensitive to high temperatures if these temperatures are accompanied by high humidity,” explains Theunis.

“Therefore, places such as Upington, where it can reach 40°C, but where the humidity is very low, are not suited to macadamias, whereas the same 40°C in Komatipoort with higher humidity is feasible.”

This means that areas which have previously been deemed too hot might now be considered as suitable macadamia production areas, boding well for the expansion of the industry to areas such as Pongola, Malelane and Komatipoort.

Strict stomatal control is the reason that macadamias are so finely attuned to humidity, explains Theunis.

“To put it simply, the macadamia leaf can sense if the environment around it is wet or dry. When it’s excessively dry, macadamias close their stomata, which act like valves on an irrigation system, in an attempt to avoid excessive volumes of water being used.

“It’s due to this degree of stomatal control that macadamias flourish in a range of environments and use less water than other crops such as sugar cane. In crop water science, this is often referred to as a ‘supply limited system’, mostly because the tree controls the amount of water demanded from the atmosphere.”

As the tree controls the amount of water it uses during the day, farmers and irrigation engineers can design irrigation systems to meet the maximum water demand of a tree per day.

According to Armand, their research shows that a mature 12-year-old Beaumont macadamia tree in Mbombela transpires a maximum of 50ℓ per tree per day.

It is important to note that this is only water lost through transpiration (tree use). When applying water, this number should be adjusted for evaporation, which will differ significantly between environments, orchards and irrigation systems, explains Armand.

“Farmers can, however, minimise the water lost through evaporation by implementing good management practices, such as mulching. This not only increases irrigation water-use efficiency but also contributes to healthier and more sustainable soils.”

Although their research is not yet complete, Theunis says he believes the days of applying 700ℓ of water per tree per week are long gone.

“Macadamia growers are also advised to start monitoring not only water use, but also nutrients present in the groundwater to ensure they are increasing both water-use and nutrient-use efficiency.”