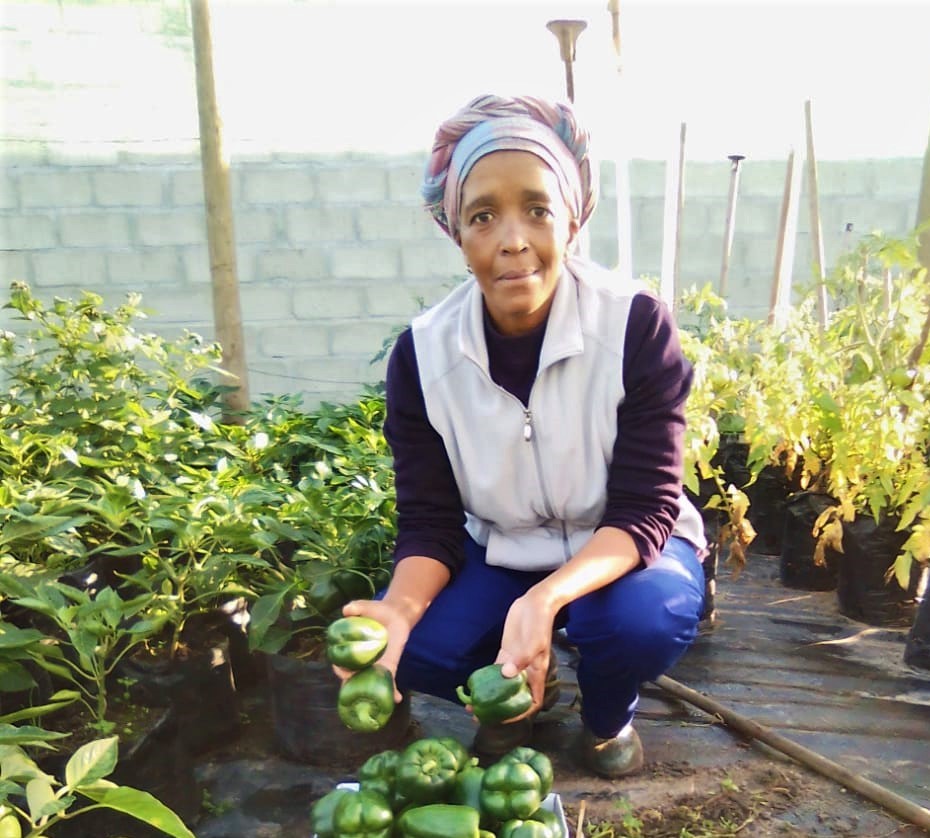 On the outskirts of the Mother City lies Gugulethu, one of the oldest townships with just shy of 100 000 residents. One of them is Nomonde Kweza, an award-winning farmer and the owner of Ulimo Lwethu food garden.

The people of Gugs simply call her Mama Nomonde. At 52, she has helped to create no less than eight vegetable gardens – also in Philippi and Nyanga. Speaking to Food For Mzansi she says, “There’s two things you’ll find in my blood. One is the DNA of both my parents and the other is agriculture. You can’t separate me from agriculture. We’re in the same WhatsApp group.”

Kweza has been a farmer for as long as she can remember. Her family farmed on 50 hectares in the Eastern Cape and by the time she was just eight, her grandparents allocated almost a hectare of their land for her to cultivate vegetables.

She recalls being an inquisitive child and certainly not afraid to get her hands dirty.

“In the mornings I would go with my parents to tend the cows, sheep, pigs, chickens, and horses. I would harass them with questions. What is this? What is that? All the time,” she laughs, reminiscing about days gone by. “I was always in the field. I don’t have any memory of ever playing with a toy. Soil and seeds were my toys.”

Cultivating vegetables on her own piece of land since the age of eight taught her skills she could not learn in a classroom. For her, digging out soil to plant seeds wasn’t a game. Kweza says, “I wasn’t planting for fun. I was running a business. I sold my produce and the money paid my school fees.”

In 1986, after matriculating, Kweza enrolled at the former Border Technikon in Eastern Cape to study horticulture at the institution. But her higher education experience was short-lived and ended within one year.

“I was always wearing dungarees. Also, in my time there was no weaves and braids. I was wearing my short afro and people couldn’t tell if I was a boy or a girl,” she laughs.

Back then it was quite uncommon for women to study agriculture. Her attempt to trick the education system in thinking she was a man failed, however. She was kicked out of the technikon and moved to Cape Town where she enrolled at the University of Cape Town to study education.

After graduating in 2006, Kweza taught for a year at Belhar Primary School and then became an English, biology and Maths teacher for Golden Arrow Bus Services, where she taught drivers who had not passed matric.

Training small-scale farmers in their own language

It was around this time that Kweza realised that people in Gugulethu did not take agriculture seriously. She felt the need to change that. She identified land behind the Ekuphumuleni Old Age Home where she received a warm welcome. There she opened the Ulimo Lwethu Food Garden in March 2006.

“IT’S IMPORTANT THAT SMALL-SCALE FARMERS ARE TRAINED IN A LANGUAGE THEY UNDERSTAND. THAT IS HOW THE INDUSTRY GROWS AND BECOMES MORE INCLUSIVE,” KWEZA EXPLAINS.

Over the years, Kweza has helped establish and facilitate a further seven gardens in areas scattered throughout Cape Town’s informal settlements. Today, the gardens provide employment for eight people.

She has trained many people in how to grow their own food and she teaches them in isiXhosa, the predominant language here. “It’s important that small-scale farmers are trained in a language they understand. That is how the industry grows and becomes more inclusive,” Kweza explains.

But it is not always easy. Transportation and the cost of fuel has been a real enemy of progress for the food growers. “We club R200 every month to have money to hire transport that will deliver our produce to our markets. It gets expensive sometimes.”

Kweza jokes that she has “dual citizenship” in South Africa because she is always moving between her homes in Eastern Cape and in Cape Town.

On one of her returns to Eastern Cape, Kweza recalls collaborating on a German farming project that upskilled rural women in the province on their family farm. The project, which was covered by the Daily Dispatch newspaper, was picked up by Border Technikon officials.

“Can you imagine the same school that kicked me out, was now sending students to our farm to get agricultural training from me over school holidays.”

Kweza trained the students for a year until she decided to return to Cape Town. Today, Kweza is frequently elected to take the lead in her community to speak about farming. She regularly hosts talks where she motivates and organises people to start their own garden projects.

“I think I’ve written my book in my own way. I have broken the myth that to be a farmer, you must be academically inclined. That’s nonsense,” she says.

Mama Nomonde says, “Agricultural communities and institutions must stop asking us for certificates and degrees. They must ask us: ‘Are you eager? Are you willing? How good are you? And can you do it?’”

The farmer adds that she hopes to see herself settled on a big farm one day where she can eventually employ hundreds of people from her community. To her, nothing is impossible. She’s beaten the odds before, after all, like she did in 2014 when she was crowned the best subsistence farmer in the Western Cape.