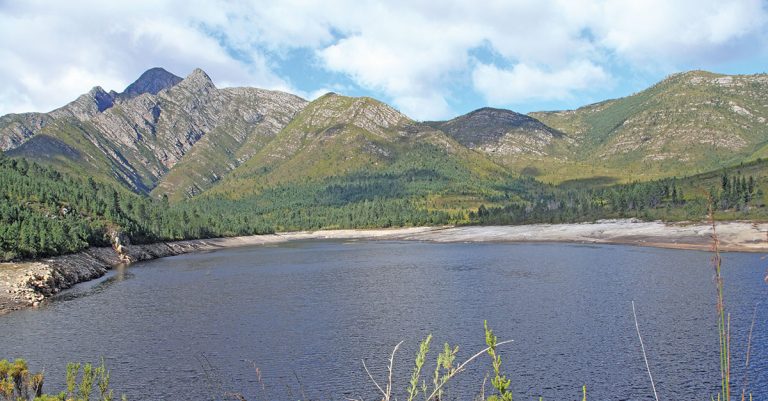 Managing irrigation of fruit when water is scarce

The Langkloof, a fertile valley bisected by the R62 in the Eastern Cape, is famous for its fruit production.

The past few years, however, have seen farmers in the area struggling to provide enough water for their orchards. The valley received its last normal annual rainfall in 2015, and competition for water in urban and other farming areas has resulted in deep cuts in water allocations to Langkloof producers.

“The Langkloof falls in the main catchment area of the Kouga Dam, which supplies people in and around Gqeberha [Port Elizabeth] as well as the Gamtoos Irrigation Board.

“In June this year, the dam contained less than 4% of its capacity,” explains Johan Kotzé, chairperson of Langkloof Water and director of Dutoit Agri Eastern Cape.

While isolated heavy downpours have fallen over this time, farmers have been unable to take advantage of these because there is a legal limit to the size of on-farm dams.

“We’re not allowed to build bigger dams, which is a pity, as it would allow us to store water for distribution over longer periods and in effect reduce our production risks. Now, once our dams are full, we lose water that could have been saved for the next season,” says Kotzé.

To take control of the situation and enhance its water-use efficiency, Dutoit Agri has invested in improved infrastructure, expertise and technology.

“We have 760ha under apples, pears, plums and berries in the Langkloof and are experimenting with kiwis. While the area under production and its water footprint have declined since 2005, the value of our output has increased by double digits,” says Kotzé.

“A decade ago, it was still considered OK to use a standard irrigation system that delivered blanket applications of water. But this resulted in over-irrigation of some parts of the orchard and under-irrigation of others. Rising costs, dwindling water supplies and the move to higher-density plantings have seen a shift to more precise systems that, to varying degrees, account for soil, typographic and microclimatic differences,” says Kotzé.

To ensure a long-term, economically viable solution, Dutoit Agri has employed a multidisciplinary team of specialists to help with orchard planning and irrigation design.

“Design and planning have become so specialised that it’s better to consult a team of experts than rely on our own limited insights and pay for mistakes later. The specialists produced a financially viable solution that addressed everything from soil and production variations to specifying the most suitable equipment,” Kotzé explains.

Orchards, for example, are divided into smaller sections according to their irrigation and nutritional requirements; these are based on physical and chemical soil analyses, intended cultivars and rootstocks, and the slope, aspect and planned row direction.

The sections are then treated as separate entities during irrigation and fertilisation. Clay-type soil, for example, has a higher water absorption capacity than sandy soil, and will therefore be irrigated less frequently, while trees in deep soil tend to be hardier than those in shallow soil, as their roots can seek water and nutrients deeper down.

Drip versus micro
Drip irrigation is even more water-efficient than short-radius micro-sprinklers, but can only be used in cooler orchards with good water-holding capacity. These are located mainly to the south of the R62 on the Dutoit Group’s farms.

“Supplying enough water to saturate the soil during heatwaves and dry spells is really difficult with drip irrigation, especially if the soil doesn’t have good water-holding capacity. We therefore use micro-sprinklers in our drier and sandier orchards, primarily to the north of the R62. These have the added advantage of cooling the orchards down, which can help improve the fruit colour of coloured varieties,” explains Kotzé.

Another advantage of drip irrigation is that fertiliser can be applied via the system. Fertiliser still has to be broadcast in the orchards under micro-sprinklers, but rather than doing blanket applications, each block is treated individually with precision spreaders.

However, having the best irrigation infrastructure and equipment in the world means little if the system is used incorrectly. The Dutoit Group has therefore appointed an irrigation specialist company, Agrimotion, to help make irrigation decisions based on DFM probe readings at various depths up to 80cm below the soil surface.

These readings are used in combination with climatic factors influencing water uptake and soil moisture levels, such as humidity, temperature and rainfall data, as well as the growth phase of each cultivar. Water application is automated, but Kotzé says that orchards still have to be checked to evaluate the functioning of the system.

“It takes two to three years to calibrate the system. But even after its accuracy improves, you still need feet in the orchard to monitor what’s happening. The problem is that the system might show you’re applying sufficient water, but the water might be lost if drippers or micros are blocked, broken or have fallen over,” Kotzé explains.

Reducing evaporation
Mulch and compost reduce evaporation, improve the water-holding capacity of the soil, and buffer trees against climatic shocks such as heatwaves. They also create a healthier growth medium, resulting in more resilient trees.

The mulch comprises wood chips made from fruit trees removed from the orchards and other trees cut down as part of Dutoit Group’s alien-clearing initiative.

“We prefer wood chips to straw; they’re readily available on the farm and they take a couple of years longer to decompose. We make sure, however, not to use plant material that might contain contagious diseases when doing this,” says Kotzé.

The mulch is left to decompose for a year before usage to prevent the plant material removing nitrogen from the soil. Compost is bought in and used along with the mulch.

“We cover the compost with mulch to protect the microorganisms against sunlight and heat, and this helps maintain the efficiency of the compost. Mulch also introduces carbon, which serves as food for microorganisms,” Kotzé explains.

Compost and mulch are applied at a rate of about 20m2/ha and 200m2/ha respectively.
The trees are fertilised as required to ensure optimal output and quality. To this end, agricultural data analytics company Aerobotics is contracted to perform remote-sensing via drones annually in November and December/January.

Income per litre of water use has been further improved, thanks to improved cultivars and rootstocks. Dwarfing rootstocks, in particular, have enabled the team to plant trees at higher densities, which has resulted in more fruit per hectare and litre of water used.

An added advantage is that the trees are less labour-intensive to manage. The choice of rootstock depends on factors such as soil and cultivar.

“We basically try to manipulate growth and yield through rootstock selection,” explains Kotzé.

Netting
The Dutoit Group installs fixed nets in the new orchards, and drape nets in older ones. The nets are used primarily to protect the fruit against hail damage, but also to prevent damage caused by the sun and birds.

“Nets are expensive, but the investment can pay for itself within a year if there’s a hailstorm. If not, the investment is likely to repay itself in five to eight years, thanks to improved fruit quality. The use of nets, in combination with new cultivars, has helped to increase our Class 1 packouts by up to 30%,” says Kotzé.

He and his team started out with flat-roofed netting structures, but have since moved to V-shaped roofs, with the steeple above the tops of the trees. The lower sections of the structure are joined with clips, allowing the nets to be opened to the middle of the rows.

“With the V-shaped design, the hail falls to the ground rather than accumulating on the roof, as with the flat design. It’s also more durable and less likely to tear, as well as more pollinator-friendly. We’ve found that bees can get disorientated in the flat-roofed structures,” says Kotzé.

The drape nets are thrown over the trees shortly after hand-thinning towards mid- November, and are removed just before picking.

“The drape nets shouldn’t be used on young trees, as they can damage the central leader. On the other hand, this method can be used strategically to manipulate or limit tree growth,” says Kotzé.

Black netting is used on green apple varieties, primarily for sun protection, whereas crystal netting is used for coloured varieties, which require more light and higher fluctuations in day and night temperatures for good colour development.

“Nets, improved irrigation infrastructure, and new varieties and rootstocks, in combination with the agritech revolution, are allowing farmers to significantly improve their water-use efficiencies. Just think how much more we’d be able to contribute to economic growth and job creation if we could build bigger dams and if water furrows were covered to reduce evaporation,” says Kotzé.