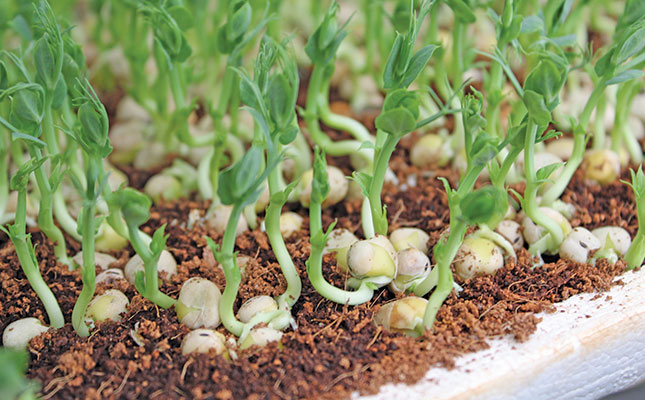 As the owners of an IT business, husband-and-wife team Jan-Hendrik and Melanie du Plessis spent many hours at their desks. An energetic couple, they therefore went looking for a hobby that involved some physical exertion.

“I came across a YouTube clip on microgreen farming, so decided to start experimenting,” recalls Jan-Hendrik

. “After the first six trays I planted were a success, Melanie decided to see if there was a market in the Lowveld so that we could scale up production.”

At that stage, Melanie had a sideline business buying honey from farmers, packaging it, and selling it to farm stalls. But dwindling bee populations saw production falling, and she was eager to start a new project.

“I took our first harvest of the microgreens and drove from one restaurant to the next to see if anyone was interested. That was in November 2018, and today we have a stable business supplying 30kg of microgreens a month to about 10 customers.”

The couple run the farming venture with just one assistant. Jan-Hendrik is responsible for production, while Melanie handles sales and marketing.

“It’s great that we can do this together as a couple. We dream together and then work to get to a stage where we put our dreams into action,” she says.

Production
Microgreen farming requires minimal land. Their 5m x 2,5m greenhouse, made of 200-micron polyethylene spread over PVC pipes, is close to their home in a small suburb in Sabie, in Mpumalanga.

With four shelves on each side for the growing trays, the facility enables them to produce enough microgreens to earn a decent income. As they only use half the shelves, there is room to expand to 60kg/month.

Jan-Hendrik starts his production cycle by soaking the seeds for 24 hours before planting.

The growth medium, coco peat, comes in blocks, and these are also soaked in water before being taken apart and placed in styrofoam seedling trays. The seeds are sprinkled onto the coco peat and stacked on top of one other, as the compression aids germination. Once the seeds start germinating, the trays are spread out in the greenhouse.

According to Jan-Hendrik, sowing density differs from one crop to the next and involves trial and error; oversowing can result in mould.

Ambient temperature plays a key role in germination. In winter, for example, the harvest is extended by two days as the plants grow more slowly under cooler conditions.

Irrigation
Jan-Hendrik and Melanie irrigate the crop manually, using about 50ℓ of water a week to produce 8kg of microgreens.

They use a watering can to irrigate the top trays until the coco peat is fully soaked and water starts draining through to the tray below, eventually wetting all the trays. A plastic lining in the last tray collects the excess water for reuse.

It is important to drain the water to ensure that the plants don’t stand in water, as this would rapidly lead to mould due to the planting density.

“They can also get root rot, so we don’t water according to a set schedule, but monitor the moisture level, and water when necessary,” explains Jan-Hendrik. “In summer, we irrigate every three to four days, and in winter, about once a week.”

He adds that proper drainage and air circulation are key to a successful microgreen operation.

“You can lose an entire batch if there’s no circulation for a day because the plants start to grow mouldy. We lift the sides of the greenhouse to get a breeze moving through, and use a fan when there’s no breeze, and in winter, when the sides are down.”

Microgreens require no fertilisers or inputs as they receive all their nutrients from the seed and are harvested before they require a further boost.

The greens are harvested once a week in the late afternoon, when it is cooler, then packed and refrigerated for delivery the next day.

Radishes are harvested after about nine days, sunflowers and peas at around 15 days, beetroot between 12 and 18 days, and popcorn shoots at 10 days. The leaves are cut with a long, sharp knife.

Trial and error
As the business is relatively new, much of what Jan-Hendrik and Melanie have undertaken is in a testing phase. Amongst the innovations they are looking at are hydroponic lettuce production and growing out unsold Swiss chard microgreens.

To grow the lettuce, Jan-Hendrik began by making holes in six 100mm, heavy-metal-free PVC pipes cut to the length of the greenhouse. He also made holes at smaller intervals in two similar pipes for seedlings.

Production starts by placing the seeds in ‘horticubes’, high- drainage foam blocks designed for growing hydroponic seeds, and watering them until they germinate.

Each block is then placed in a hydroponic net pot (a small, open-weave plastic basket) containing coco peat, which is then fitted into one of the holes in the seedling pipe.

After another week, the seedlings in their net pots are transferred to the larger pipe. The pipes are kept two-thirds full of water, so that the upper roots are above the water and the lower ones submerged.

Jan-Hendrik has also started growing out unsold Swiss chard microgreens for sale as full-size vegetables, rather than discarding them. For this, he uses plastic 2ℓ soft drink bottles with holes cut in their sides; they are connected in a line and kept outside the greenhouse.

“Weeds don’t get an opportunity to grow in the bottles. The moisture also creates a microclimate inside the bottle,” he says.

The fast turnaround time of microgreens allows for frequent experimentation.

“If you make a mistake this week, you can fix it next week with the following cycle,” says Jan-Hendrik.

Obtaining the right seed is one of the couple’s biggest challenges.

“Not many suppliers produce microgreens,” says Melanie. “The biggest bag we can buy is 5kg and it has to be couriered, which pushes up the price.

“We once bought radish seeds, and the radishes had black spots. It took us weeks to figure out it was a bad batch of seed.”

Rats and birds are attracted to microgreens, and the couple have therefore introduced rodent control as well as nets around the greenhouse to keep the birds out.

A ready market
Melanie’s outgoing personality has stood her in good stead, as she has had to knock on many doors to market their produce. However, with several fine dining restaurants in the Lowveld area, she soon received steady orders.

The couple’s microgreens are also stocked in local supermarkets and bought by companies supplying groceries to the luxury lodges around the Kruger National Park.

“We’ve noticed that microgreens’ popularity is seasonal as people tend to eat more salads in summer. You need less to garnish stews in winter,” she says. “This means our income can fluctuate between seasons.”

Consumer education on the benefits and versatility of microgreens is needed, she says.

“Once people start realising how nutritious and tasty they are, demand will grow. They have 40% more nutrition than vegetables, and are regarded as a superfood. The varieties all have their own benefits, like improving heart health, promoting digestion, and aiding in cellular recovery.”

Jan-Hendrik and Melanie want to grow their business a step at a time, managing each stage successfully before going on to the next.

This, they say, will minimise costly mistakes, and ensure that Bumblebee Organics goes from strength to strength.