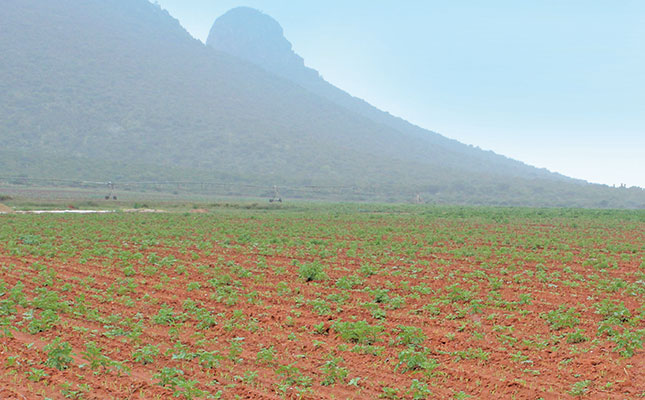 Potato production at AL 3 Boerdery is spread across three provinces to ensure a 10-month supply to the markets. Farms in Limpopo, Mpumalanga and the Northern Cape provide an annual harvest of between 55 000t and 60 000t, and achieve an average yield of 60t/ha.

The main cultivar grown is Valor, and limited quantities of Georgina, Taisiya, Lanorma, Mondeo, Panamera and Mondial are also produced.

CT van der Merwe, CEO of AL 3 Boerdery, says that it is important to stay up to date with new cultivars on the market, and he therefore plants small quantities of different varieties to test their performance.

Soil health
The key to successful potato production, he stresses, is to maintain soil health. He thus rests the land between crops.

“Because it’s so hot and dry in Dendron [in Limpopo], we have the advantage that diseases tend to abate more quickly. However, we struggle to keep healthy organisms alive, which necessitates planting cover crops. And we still have to kill the harmful bacteria,” he explains.

Crops are rotated using two separate cycles: a three-year cycle where potatoes and sorghum are alternated, and a five-year cycle that includes rotations of potatoes, onions, butternut and sorghum.

Van der Merwe adds that water is a limitation on the Dendron farm. This further justifies the planting of cover crops between rotations.

“In the three-year cycle, we plant potatoes in the first year, followed by sorghum, which is left on the land for two years. After this, we plant potatoes again. The sorghum isn’t harvested, but rather used as a cover crop because it’s cheap, tough and doesn’t require added nutrients to flourish. We seed at a rate of 10kg/ ha and don’t need to apply any fertiliser, as the soil has leftover nutrients from the previous crop.

“We irrigate the sorghum until it starts emerging and then leave it to grow unaided.

“We cut it periodically, letting the cuttings remain on the land to create a mulch layer, which helps retain soil moisture.”

The mulch also increases the level of carbon in the soil and aids in the growth of micro-organisms.

“It protects the soil from the extreme heat and prevents weeds from taking over, which in turn reduces our reliance on herbicides,” adds Van der Merwe.

The decision of whether to plant butternut or onions is based on the area and soil.
Butternut thrives on some lands, while onions do better on others.

About 19 000t of onions are harvested each year, with the yield varying between 50t/ha and 70t/ha depending on the region. Butternut production amounts to 7 000t a year, and the aim is to obtain a yield of 30t/ha.

Nature-friendly farming
Van der Merwe has shifted towards minimum-till in an effort to create a habitat favouring micro-organisms. A disc is used to cut the grass and sorghum on the land; once the organic material is completely broken down, the lands are ripped.

“We add calcitic lime three years before planting the potatoes. We don’t need to add dolomitic lime on most Limpopo lands because we already have quite high levels of magnesium in the soil.

All of the compost used on the farm is produced in-house.

“We also mix in whole onions, which add extra heat in the compost mix as they decay, so it quickens the composting process of the other materials.

Potassium sulphate and MAP are added to the soil when the potatoes are planted. In Limpopo, no additional nitrogen is added, and no chemicals are used during planting.

Van der Merwe highlights the importance of moisture in the soil before planting. He and his team use a five-factor rating system, which includes the soil water capacity that should be reached before planting. Sometimes, irrigation is needed to get the soil to this stage.

“After the crop has been planted, we leave it for about four weeks before irrigating again,” he says. ”At plant emergence, we apply our first top dressing of fertiliser, based on leaf analysis. The nutrients vary from year to year. Further fertilisation is determined by a leaf analysis done every two weeks.”

Plant health is of the utmost importance, he stresses.

“Pests and diseases always affect the weaker plants first. For this reason, we don’t spray correctively, but preventatively.

“We avoid heavy, red label poisons, only resorting to them when we have a plague that we can’t get under control. On the Highveld, we need to spray for nutsedge before the potatoes emerge, but not in Limpopo.”

Compost and cover crops help ensure the health of the plants.

“Farming in harmony with nature also results in longer shelf life. We found this out by chance when market agents told us that buyers who have to travel far specifically ask for our potatoes. We believe it’s because the plants are healthier and produce a strong crop with more vitality, resulting in a longer shelf life.”

About 90% of the crops in Dendron are irrigated with borehole water.

“If we have good rain and our borehole water levels are high, we plant a bit more,” explains Van der Merwe.

“By managing our water sources meticulously, we’ve ensured that we can keep farming here. We receive only about 350mm of rain annually, so we focus on capturing as much of it as possible.”

The farm makes use of centre pivots, of which half have been converted to draglines. These result in less water evaporation, in turn reducing the amount of water required; this has cut the farm’s water and electricity costs by 30% and 45% a year respectively.

Van der Merwe says that the very high level of sodium in the water is a major challenge, as irrigating applies up to 700kg/ ha of sodium to the crops.

There is also a shortage of magnesium in the soil in various locations, causing a problem with potassium and calcium uptake in the plants that cannot easily be fixed.

“Consequently, we’ve started adding gypsum through the irrigation system after drying out the soil a bit. This binds the sulphate with the sodium, so it leaches the sodium out and the calcium remains in the soil.”

Seed potatoes
According to Van der Merwe, 90% of a potato farmer’s success is based on the quality of seed. For this reason, AL 3 Boerdery grows its own seed in partnership with Richtersveld Growers in Alexander Bay, who multiplies the seed from a G0 to a G3.

“Buying in seed can be risky as it’s often old or immature. We have to stick to our planting programme, so we can’t wait for seed to arrive or wait for it to mature if it arrives immature. Producing our own seed also gives us control over quality.

“The seed potatoes are harvested as required, ensuring that they arrive on the farm at the optimal time. They need to rest for eight weeks between being harvested and being planted. Planting seed potatoes that have matured for 16 weeks, for example, produces inferior plants as they lose too much vigour.”