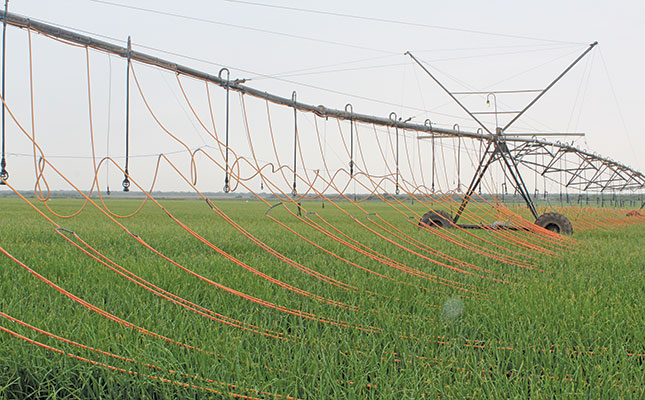 Irrigation supports 25% to 30% of national agricultural production in South Africa. Although irrigated agriculture uses 62% of the available water resources in South Africa, the importance of this sector for the economy and food security is undisputed.

Reducing hectares under irrigation is therefore not the answer to water shortages. What is needed is more efficient use of the water that is available.

To this end, innovations in the field have included low-flow drip irrigation, draglines and micro sprinklers, all of which have succeeded at growing crops optimally while using less water.

As the new decade dawns, even greater improvements are coming into play. Felix Reinders, programme manager at the Agricultural Research Council’s Department of Agricultural Engineering, notes that new and emerging technologies or solutions in irrigation can be grouped into three main categories: augmenting and improving water supply; improving water productivity; and managing irrigation systems more efficiently.

Augmenting and improving water supply.
This includes irrigation systems that make use of solar and wind power; software that controls water productivity, from dam water release to root zone application; and integrated water administration systems that deliver water on demand through canal networks and rivers.

Improving water productivity.
Innovations here include pivot-drip systems that combine the efficiency of surface drip irrigation with the flexibility and cost-effectiveness of mechanised irrigation systems, and integrated sensors to monitor soil and plants. Through wireless communication, the sensors help algorithms to better control and manage the irrigation systems. Another technology that has advanced is micro-irrigation. Currently, it constitutes only 6% of irrigated land in South Africa, but its use continues to grow, notes Reinders. Other innovations include ultra-low-flow (0,4ℓ/ha) compensated drip lines; low-flow spray or micro-sprinkler irrigation; and the use of drones to establish where to apply specific quantities of water to the crop.

Ultimately, efficient irrigation involves applying water correctly, at the right time, with the least amount of waste, and as economically as possible with the correct irrigation technologies, says Reinders.

“It’s vital for an irrigation system to be able to adapt to a variable and changing climate,” he adds. “Emerging irrigation technologies, together with existing technologies, are expected to play a much bigger role in this regard in future.”

As knowledge about plants’ water requirements and the farmer’s ability to measure aspects such as soil and plant moisture has improved, so has understanding of irrigation scheduling. And many traditional methods of irrigation have been found to be less efficient than once thought.

For example, the traditional application of drip irrigation often means that water delivery is too fast and too deep, says Willem Botha, marketing manager at Netafim.

“To manage this, the industry adopted a pulse irrigation scheduling approach with many small and frequent active irrigations,” he adds.

However, these often combined to cause over-saturated subsoil, fertiliser leaching, hydraulic inaccuracy and other problems.

One outcome of low-flow drip technology has been the ‘continuous irrigation’ concept.

“Trials on tree crops show that continuous irrigation solved many of the challenges faced in managing drip irrigation, and the concept has found increasing application in South Africa’s citrus and macadamia industries,” says Botha.

With continuous irrigation, low-delivery drippers irrigate at a very low level over a longer time.

The biggest change has been moving from several irrigation shifts to one irrigation shift.
Botha explains that with higher flow irrigation systems, using drippers with flow rates such as 3,5ℓ/h, 2,3ℓ/h and 1,6ℓ/h involves a few short irrigation pulses of less than an hour’s duration per day. This leads to severe over- and-under irrigation in places.

“The fact that the irrigation system is no longer repeatedly emptied and refilled to accommodate several irrigation shifts significantly increases the efficiency of the system,” says Botha.

“Consider a traditional system with two irrigation shifts made up of six one-hour pulses each. If the emptying and refilling of the systems takes 10 minutes, the system is inefficient for 16,7% (10/60) of the irrigation time.

“If you use a low-flow continuous irrigation system with one 12-hour shift, and the system still takes 10 minutes to empty and refill, the inefficient time comes down to 1,4% (10/720) of the total irrigation time.

“If you have two continuous irrigation shifts, this percentage would move up to 2,8% (10/360), which is still a major improvement in the efficiency of the system.”

Better control
Botha notes that the greatest advantage of continuous irrigation remains the fact that farmers can better control the depth of wetting and reduce under- and over-irrigation, thereby improving water-use efficiency and soil aeration.

“With continuous irrigation, water application will remain constant,” he says.

He adds that, with shift irrigation, the soil changes from dry to wet and back again; with continuous irrigation, however, it stays moist.

“The drier the soil gets, the more energy the plant will use to take up water. This, of course, is energy that the plant could have used for growth.

“If you keep the root zone at a certain [moisture] level throughout, the water is much more accessible to the plant. It uses less energy for water consumption, which eventually translates to a higher yield.”

Other advantages of continuous irrigation include the following:

It is important to change one’s way of thinking about irrigation design and adapt to the possibilities created by low flow technology and concepts such as continuous irrigation, says Botha.

“The required water application of a certain area doesn’t double if the number of trees planted in the area is doubled. You should therefore not use the amount of water per tree calculated for a certain tree density as a benchmark for other calculations. Application rates always refer to volume of water per full planted hectare.”

Continuous irrigation requires a change to pumphouse and mainline design, as irrigation is no longer done in shorter shifts where the irrigation of blocks is alternated. Instead, blocks are continuously and often simultaneously irrigated, and dedicated mainlines to each block with a central pumphouse are required.

This might involve a higher initial cost, notes Botha, but “dedicated mainlines allow you
to manage different soil types separately and apply a different fertiliser recipe to each block”.

“It also makes automation easier and will lead to savings later on.” Although the good far outweighs the bad with continuous irrigation, no concept is ever without its disadvantages, Botha cautions.

Continuous oxidation treatment is also crucial, and the system design should include a
central chemical dosing facility from day one.

“There should also be dedicated equipment installed for the continuous injection of an oxidising agent,” says Botha.

Less is more
The use of continuous irrigation has shown that the actual water requirements of certain tree crops are much lower than traditionally thought, as orchards show constant and even higher yields with much lower, but more efficient water application, says Botha.

Email Willem Botha at willem.botha@netafim.com, or Felix Reinders
at ReindersF@arc.agric.za.