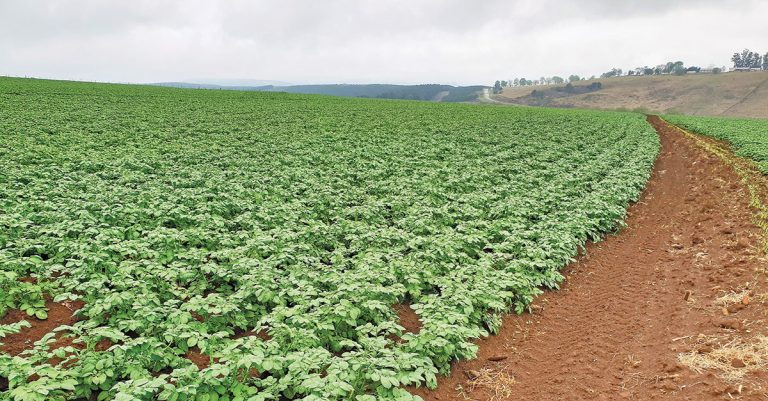 South Africa is one of only a few countries in the world where the climate and soils are sufficiently diverse to enable year-round potato production. Of course, each part of the country where potatoes are grown has its own optimal window for planting and harvesting.

To take advantage of supply-and-demand pricing dynamics, farmers typically aim to sell their harvests at times when potato supplies from other areas of South Africa are dwindling or not yet available.

However, there are always supply overlaps between potato-growing areas, and it is at these times that competition is greatest among farmers.

Graeme Jarvie, who heads up the agricultural operations of his family’s Jarvie Group investment business in KwaZulu-Natal, believes that taking a ‘less is more’ management approach gives the group’s GoldenGrow potato enterprise a number of advantages over its competitors.

This is in rotation with maize and dry bean cash crops, and with oats that are used as both green feed and hay for the Jarvie Group’s beef cattle. The rotation system spreads financial risk, helps break pest and disease cycles, and promotes soil health.

“We aim to take advantage of, and maximise on, an equally narrow window when we can get the best possible prices for our harvests. So we plant our potatoes between mid-July and the end of August in order to harvest, and immediately pack and market them, between December and February,” he says.

Jarvie adds that planting GoldenGrow’s potatoes too early means that the plants
will grow tall enough to be increasingly susceptible to frost damage in mid-to late-winter.

Younger potato plants can better tolerate some frost and then continue growing beyond winter. These plants can also survive on the shorter day-length of this season, whereas older plants would yield less because they require more sunlight.

An added challenge of commercial potato production in the Moist Midlands Mistbelt is that even in November and December, when much of the rest of South Africa is experiencing increasingly warm late spring and early summer weather, it is often misty and drizzly, with suboptimal sunshine and heat units.

GoldenGrow’s management must therefore be alert about managing fungal leaf diseases, which can proliferate on the potato plants under these climatic conditions.

“Planting after August would lead to undesirably strong vegetative growth of the
young potato plants,” explains Jarvie. “This is because the warmer soil mineralises nitrogen, which the plants then utilise, putting more of their other nutritional and moisture resources into above-ground growth instead of growing their tubers.

“Also, if we harvest our potatoes after February, GoldenGrow faces market competition from potatoes harvested in parts of the Free State at that time.”

With its current resources, GoldenGrow can handle only a limited volume of plant-ready seed potatoes before they start losing their viability and yield potential.

The enterprise currently grows five varieties, namely Mondial, Mondeo, Elmundo, Panamera and Valor, as its on-farm trials have identified these as suitable for local planting and production conditions, farm resources, consumer demand, and the most opportune marketing window.

Nevertheless, Jarvie and his management team always dedicate about 10ha of plots to trialling newer, and possibly even better-suited, potato varieties that are recommended by GoldenGrow’s seed potato suppliers and by industry organisation Potatoes South Africa.

“For us, trying to get too many potato hectares into the ground would most likely cause us to drift out of our ideal planting window,” says Jarvie. “This would result in less-than-optimal yield and quality, and poorer prices. In turn, this would put our profitability under added pressure.

“Like many other agricultural commodities, potatoes are typically a high-risk, low-margin crop. Right now, our total direct cost to plant, grow, harvest and market a potato crop is about R130 000/ha. We simply can’t afford to allow our production area to get too big for us to manage and handle properly.”

GoldenGrow’s preferred potato varieties require their own particular planting densities. The management team, with guidance from seed potato and other input suppliers, calculates the volumes and synchronises the timing of seed potato deliveries to match the capabilities of the enterprise’s two potato planters and their supporting resources. Together, these are capable of planting between 4ha and 6ha a day.

The dangers of delaying the harvest
According to Jarvie, it is also extremely important to match GoldenGrow’s potato seed requirements and expected commercial potato harvests to the enterprise’s harvesting equipment, on-farm storage and packing facilities, and marketing capabilities.

If final planted hectares exceed these capabilities, there is the very real risk that
potatoes ready for harvesting will end up sitting unnecessarily long in the soil. This increases the likelihood they will be attacked by soil-borne pests and diseases, or even start rotting.

When eventually harvested, these potatoes will possibly have severely compromised quality and will have to be marketed outside of GoldenGrow’s ideal window. Together, these two factors could result in lower prices for otherwise first-grade potatoes.

“The equipment, [packhouse] and workers get overwhelmed. In the [packhouse] particularly, trying to handle more potatoes than the facility and system were designed for results in many more mistakes being made with grading and packing. And the greater the mix of quality because of late harvesting, the more inefficient the facility becomes as it struggles to deal with this mix.”

He adds that if GoldenGrow’s potato harvests are brought in at the correct times, the majority will be first grade. The packhouse will then find it far easier to sort the comparatively fewer lower-grade potatoes from the many first-grade ones. And, of course, marketing a crop of mostly first-grade potatoes will generate significantly more income than a crop of lesser quality.

Pests, diseases and irrigation
Jarvie explains that ‘less is more’ even in the management of GoldenGrow’s potatoes
while they are growing. Again, the size of the crop is matched to the capabilities of the enterprise’s pest and weed control, and crop nutrition.

If, for example, the hectares under potatoes exceeded the farm’s agrochemical-spraying capabilities, Jarvie and his team would most likely be forced to spray part of the crop outside of optimal conditions, such as when it is too windy or wet.

Under these unfavourable conditions, the chemicals would be less effective, possibly leading to inadequate control of pests or weeds, and hence suboptimal yields. The only alternative in this case would be to spray a second time, which would result in an added expense, more time wasted, and possible negative environmental impact.

Marketing
GoldenGrow markets its potatoes via two channels. The first is online fresh produce trading platform HelloChoice, through which it sells between 33% and 50% of its potatoes. The balance of the crop is marketed via the Durban, Pietermaritzburg and Johannesburg fresh produce markets.

With any fresh produce being at its best on the day it is harvested, and with quality being a key driver of high prices, HelloChoice allows GoldenGrow to present its freshly harvested potatoes to buyers nationwide before these potatoes have even left the farm.

For this reason, and in addition to its diligently developed and maintained reputation for quality, GoldenGrow is often able to achieve the highest possible net farm-gate prices for its harvests via HelloChoice.

“HelloChoice’s reach to buyers allows us to have many lines in the water, as the saying goes,” says Jarvie. “The more buyers interested in our potatoes, the greater the likelihood of favourable prices and tonnages bought.

“Any potatoes not sold via HelloChoice that day are trucked to the fresh produce markets that same evening so that they’re ready for trading the next morning.”

Another advantage of HelloChoice, he explains, is that the platform can provide its registered users with a daily Green Numbers Report. This is an analysis of weighted average prices achieved on a particular fresh produce marketing channel almost anywhere in the country.

This helps farmers to better identify marketing channels that promise the best prices and then allocate their marketable fresh produce to these.

Jarvie says that strategically managing fresh produce stocks to match the size of favourable markets, instead of randomly estimating and allocating markets and their requirements, is yet another example of taking a ‘less is more’ management approach.

Avoiding oversupplying marketing channels for potatoes and other fresh produce reduces
the risk of depressed prices and leftover stocks on trading floors.

The longer fresh produce stands unsold, the lower the price that it achieves. Unsold stock can even deteriorate to where it is no longer marketable and has to be discarded. In the case of the latter, the farmer gets absolutely no income for this stock and, to add insult to injury, has to pay for the market’s costs to dispose of the spoiled produce.

“Our management approach helps us avoid getting into a vicious downward spiral that will potentially lose us a lot of money. We focus on being the master of our production and marketing systems, instead of allowing them to master us,” Jarvie explains.