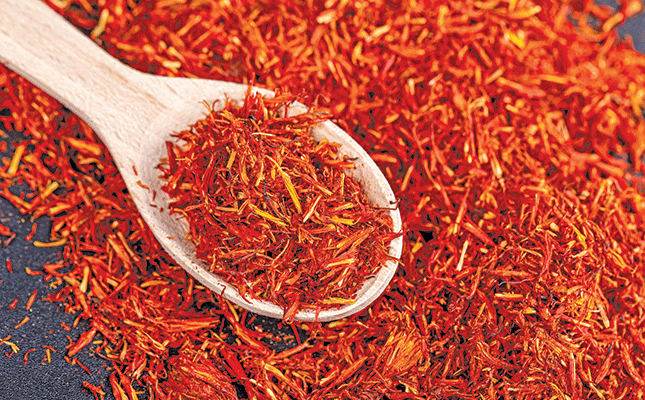 Bennie Engelbrecht grew up in the south of Namibia on the Hardap Irrigation Scheme, and planned to join his father on the family farm. After returning from his military service, however, this plan did not materialise, and he spent the next 30 years working in the television industry.

“But if the soil is under your skin, it never lets you go. I’ve always been looking for something unique to farm,” says Engelbrecht.

That “something” turned out to be saffron, and it took him four years of research to be convinced that the spice could be grown successfully in South Africa.

Iran is the world leader in saffron, producing around 300t/year. This is grown primarily by a large number of smallholder farmers, but last year a flash flood destroyed the lands and crops of 89 000 of these producers.

In India, the Kashmir region once produced good-quality saffron, but there is currently suspicion that the product there is being adulterated. It is predicted that saffron will be a R22  billion global industry by 2027. Saffron also holds untapped opportunities for cosmetic and medical developments.

Saffron in SA
Engelbrecht says he was often questioned about the viability of successfully producing saffron in South Africa.

“My small trials in Johannesburg showed what a strong grower the plant is, and that our local conditions can work. From there, I imported a few bulbs, and slowly grew larger and larger to where I am today, eight years later, farming saffron on 2,5ha in the Karoo between Calvinia and Williston.”

Engelbrecht now owns and runs Saffricon, which produces and markets saffron in South Africa and abroad.

“Saffron [has huge potential] for a farmer who has only a small piece of land, or someone who wants to enter agriculture, but is struggling to get access to a commercial-sized farm. [There is also] job creation potential due to the labour-intensive nature of the crop, “ says Engelbrecht.

To become a commercial grower takes a large initial capital outlay, as the corms are expensive. Engelbrecht therefore decided to hire bulbs out to producers instead of selling them. He currently offers franchise outgrowers the opportunity to hire 150 000 corms at R3/corm over a three-year period. Approximately 150 000 corms are sufficient to establish 0,25ha of saffron.

The corms multiply underground three times per year on average, so the 150 000 corms the farmer started with should become roughly 4 050 000 corms after three years. Engelbrecht then buys these back at R0,40/ corm, which nets the grower R1,6 million after three years just for the corms.

Engelbrecht also purchases all the saffron that is produced annually. He says that once franchise outgrowers deliver saffron to him, it gets weighed, and a 1g sample is sent away for ISO testing, whose grading determines the price. Grade 1 saffron is currently worth R150 000/kg, Grade 2 fetches R100 000/ kg, and Grade 3 is worth R45 000/kg.

The original 150 000 corms then go back to the farmer at no additional cost so that he or she can again establish a quarter of a hectare to continue production. Another reason for having three-year franchise contracts is the exponential corm multiplication.

“You actually need to lift them after three years as the field becomes too congested, affecting flowering and ultimately your ability to produce saffron,” says Engelbrecht. “Lifting the corms is currently a manual process, but a tool similar to a potato lifter would be able to do the job as well.

“I also plan to offer the outgrowers the option to retain all the corms after three years if they wish to expand their production, but that will be conditional to my having the sole rights of purchasing the saffron to market under the Saffricon brand name. The corms will then be subject to a negotiated royalty fee to Saffricon.”

He has also developed a starter pack, specifically as a trial run, to investigate a franchise opportunity. The pack comprises 7kg saffron corms of different sizes for a 20m² planting (between 500 and 700 corms), fertiliser and fungicide, a fertilisation programme, a complete production manual, a soil sample specimen bag analysed by NviroTek and Agri Technovation with saffron-specific suggestions, and the MyFarmWeb app to monitor data.

This enables buyers to make a small investment to see if they are ready to commit to commercial development.

“I want many people to experiment with saffron, as we need the data generated by their feedback for us to keep learning and refining our cultivation methods,” says Engelbrecht.

At this stage, Saffricon’s vision is to establish the crop as a commodity across the country, but it is likely to perform better in some areas than others.

“Our initial experience is that the Karoo is doing very well, and the Northern Cape and Free State are promising. The only negative feedback so far was from KwaZulu-Natal, and we think it is linked to the plentiful rain and humidity from the east coast.”

Planting
Saffron is a winter crop and the growing season is between March and October. It grows well in sandy loam soils, as the corm needs to expand and multiply underground. Saffron can deal with moderate salinity, although its yield will be affected. It requires between 2 000m³ and 3 000m³ water per season, compared with wheat or maize at 5 000m³ to 8 000m³ a season, says Engelbrecht.

A farmer can expect to harvest the flowers 40 days after planting over a two- to three-week period. This entails manual flower harvesting and manual removal of the stigmata.

A phase of vegetative growth follows until October, after which the leaves wilt and the plant goes into dormancy. The corms should stay in the ground for three years.

They experience stress every time they are lifted and replanted, and this leads to suboptimal flower and corm production. Leaving the corms underground, in contrast, promotes the natural growing cycle and its capacity to form new corms, but after three years there are simply too many corms and it is time to uproot and replant.

“You need to be careful with fungal diseases, as with any other bulb. Avoid too much compost and manure, which can burn them. We’re developing a general fertiliser that can be used throughout the different phases [of growth] to simplify management for outgrowers. Growers need to be careful with water management, as too much water can cause the corm to rot,” Engelbrecht advises.

Harvesting
Harvesting saffron is labour-intensive. The flowers are hand-picked and then taken indoors where the three stigmata per flower are carefully removed by hand. “We only process the red parts of the stigmata, as this yields the highest-quality saffron.”

“During the two- to three-week harvest period from mid-April to mid-May, you have to harvest continually. One corm can produce more than one flower, so you harvest this morning, but in the afternoon there can already be another flower.”

The dried product should be stored in a glass container, as plastic will affect the taste profile.

Marketing
Saffricon has negotiated a premium-quality market in the United Arab Emirates with a supermarket group with a strong online presence. “We don’t sell in bulk; the product gets packed under the Saffricon brand and exported. Our negotiations so far were greatly assisted by the quality of our product.”

So far this year, Saffricon has sold 170 starter packs to 134 farmers, and also signed a contract with one large-scale franchise outgrower.

“We’ve received many enquiries for next year for starter packs and commercial plantings. There’s a frenzy around saffron at the moment that needs to be managed carefully.”

While the global market for saffron is huge, the local market is still relatively small.

“My daughter-in-law is looking at ways to include saffron in some of our local traditional cuisine. Recipes are already available on our website, and people are welcome to contribute their suggestions.”

Engelbrecht cautions people against looking at the rand/kilogram potential of saffron and entering into large production without being informed. He also cautions against purchasing corms from unknown origins.

“Make sure you have a support and knowledge network on your side if you venture into saffron production!”